I often find myself looking at my two girls and longing for the level of ignorance they are afforded at the ages of 2 and under. There’s so much they are protected from, so many worries and responsibilities they don’t have to engage. What do they have to be stressed about?

When I think about doing the good and necessary work of letting my inner child have a voice, I immediately associate it with “play.” My inner child will probably stay healthy and strong as long as I play more often. That on-my-knees, hands-in-the-dirt, not-a-care-in-the-world kind of play. That is, after all, the life my children lead, right?

Meanwhile, my baby reaches for me through her cries, longing to be held, just as my toddler drops face-down in the middle of the kitchen, shaking her fists and screaming something about Elmo and cheese and her bunny stuffed animal. It’s the kind of meltdown I’ve seen on television but didn’t quite believe was real until we entered the toddler stage. (These meltdowns, I assure you, are very much real.)

What both my girls are saying, in the best way they know how, is that there’s so much for them to be stressed about. Just because they don’t understand things like COVID-19, systemic racism, or our family’s health insurance bills doesn’t mean that the life of a child is carefree bliss. While stress about Elmo may seem tiny in comparison to the weight of responsibility I feel in my day-to-day life, it’s totally legitimate to my toddler. And that matters.

Our two-year-old is a strong contender for being Daniel Tiger’s biggest fan. She could watch Daniel episodes all day long, and because my inner child is tired and would like a hearty meal and a long nap, it’s often tempting to let my daughter hang out with the Tiger family for far too long. I suppose she spends a bit more time with Daniel and friends than she needs to because I often wake up singing Daniel Tiger songs. Among the most frequently repeated in my head is a little ditty that says, “Mad, mad, mad. It helps to say I’m mad.” The episode is teaching children to give voice to their feelings, and I don’t know that anyone has gleaned as much from it as I have.

My kids may have different cares and concerns than I do, but they still have them, and I don’t want to dismiss them just because they don’t have to digest today’s headlines.

When it comes to my inner child, I’m learning that I don’t think she wants to play as much as she just wants to be heard.

What I actually long for my kids to comprehend is not current events but rather how to voice their needs, desires, and feelings—knowing they can speak because they will be well received.

It’s so easy, as we teach our children how to communicate their feelings, to teach them not to communicate their feelings. I know that as I raise my girls, I am nurturing parts of me, too. These parts of me have gone radio silent because they believed they had to. I don’t have any intentions of (regularly) expressing my feelings by going facedown on the kitchen floor in a fit of screams, but I know my inner child and my outer adult would both be served well if I could speak, rather than stuff, my feelings.

I could still stand to play more and worry less, but the right work for all ages in our home is to put words to what we feel. Lucky for us, we have Daniel Tiger leading the charge. 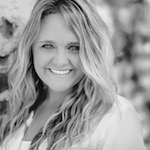 Mallory Redmond embraces anomalies —— she is an adventure-loving homebody who keeps a clean house yet always makes a mess while eating or brushing her teeth. She loves dry humor, clean sheets, and gathering around the table with friends. Mallory and her husband, Darren, live in Ohio with their beagle, Roger, and their two daughters. You can follow her writing here, where her stories are told with the hope of further uncovering the places of connection in our humanity.