I looked at my bedroom that was filled with pewter bowls, kitchen appliances, lingerie and Wedgewood china and wiggled my engagement ring off my finger as I sighed a long sigh and closed my eyes. I could not do this. I could not marry this man with a theology that seemed so different than mine. I thought I’d understood what he said when we walked though a Pennsylvania woods in the spring. I thought I comprehended his argument for the reformed faith. It was only two weeks ago, however, during a July Bible study taught by two of Dan’s seminary classmates that everything changed when my parents heard their Calvinist doctrine. They now saw Dan to be a dictatorial husband with a harsh and false theology.

My friends at The Fish House on Ohio State’s campus thought I was out of my mind to be marrying a Five Point Calvinist! “How did you get yourself into this with all the teaching on Grace you have heard here?” I questioned my love and trust in my fiancé as he rebutted every argument I could find from my stack of books defending an Arminian understanding of the Scriptures. How could I marry a church planter when I didn’t embrace his theology? I couldn’t.

I methodically wrapped my ring in an embroidered hanky and placed it in a gardenia-scented envelope filled with four newly pressed wild flowers. With my neatest script I wrote: “My love, my love, I still love you but cannot marry someone who would bar anyone from heaven if they had not been chosen as one of the elect.” I signed it and licked the seal hoping that I would not get sick as I swallowed the bitter taste.

I leapt through the pile of gifts and brushed the side of my wedding gown as I grabbed my tennis shoes from the closet and ran to my bike. I had been here before, but last time I rode my bike with such a wave of disbelief was when I had been the one who had received the call that the relationship was over. I pedaled furiously up McCoy hill wondering where I should go after hearing the thud of the postal box lid after dropping the letter that would change my life’s course.

That evening I called my parents’ bible study teacher, Martha, and explained my anguish. She kindly invited me over to her home to talk and bake whole wheat bread with her. It was the first time in my life I had ever asked an adult for help. I was nervous when I drove into her driveway with my hippie recipe book and rang the doorbell. By the time the bread was in loaf pans her counsel was to cling to what we did agree on rather than our differences. That was it. I wanted more. But, that was it. I left with my rising bread and a heavy heart and tried to picture what Dan would do when he received the letter.

Dan called a day earlier than I had calculated. He was harsh. Ready to move on. We had spent twelve months writing daily to one another because long distance phone calls were expensive. Now began a week of argumentative phone calls widening the gap of our theology and love. When hope was the bleakest my mother walked by and said,

“Maybe you should go to Florida and see if it’s worth salvaging.”

I was shocked at her sentence and the caring tone of voice.

I remembered Martha’s advise and decided that trying to save a marriage before it began was worth it. A day later the car was packed and I was ready to make the two-day drive to Florida. After checking the trunk one last time my father walked across the patio with a hanging bag of clothes and said, “I’m coming with you!” 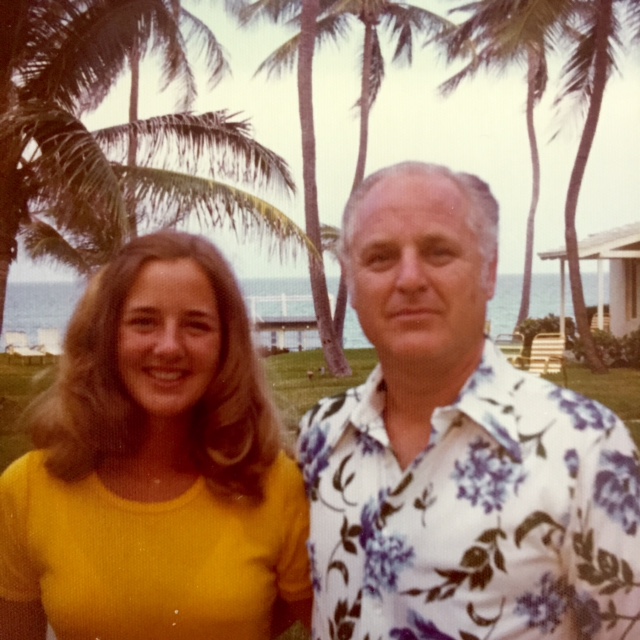 When we arrived at the pastor’s house where Dan was house sitting I got out of the car and knocked on the door. There was warmth in his face and then he peered over my shoulder and saw my father and his countenance changed. I told Dan where my father and I would be staying and he said he would come by after mowing the lawn. In my dad’s presence we were cordial and when we were alone we argued.

An elder, who was a psychologist, counseled Dan to not marry a woman who was not aligned spiritually with him. On Sunday Dan preached and my father liked what he heard and approved of the church building. (Meaning, maybe this denomination would allow for a livable salary.) After three days he flew back to Ohio and with reluctant hope I stayed behind.

The following Sunday Dan was preaching in Fort Lauderdale at a church plant that met in a restaurant called, “The Flaming Pit.” It was my worst nightmare as I recalled my eighth grade social studies book and the picture of a spider over the fire to explain the faith of our New England forefathers. To my horror, the congregation jokingly called themselves “The Flaming Pit Presbyterians!” We arrived in the parking lot early after arguing all the way from Boca Raton. Dan turned off the car and sternly looked at me and said, “Get out. I need time alone before I preach. Get out!”

I did get out and felt convicted of what I had done. Soon we went into the darkened restaurant together. I no longer was introduced as his fiancé since I wasn’t wearing his ring. I sat in a clunky maple captain’s chair along with the other thirty or so people. Dan was up front with his three-piece plaid suit and his tie plastered with pointing hunting dogs. Soon he seemed to be arguing with one of the elders. To my surprise, Dan asked us to stand then he pushed the play button on a cassette player and the sound of a pre-recorded warped piano tape playing, “Oh Sacred Head” droned and Dan’s loud and out of tune voice began this unusual Sunday service.

My Methodist hymnal did not include this odd song and what happened next was a surprise to me. Tears began to flow down my cheeks. The music, the singing was awful and Dan was at ease. He appeared fine with being a fool for Christ. By the time we sang the last stanza of this hymn I must have whispered: “I can trust him.” I wasn’t sure how, but if Dan was willing to humiliate himself and follow Jesus with all of his heart it was worth the risk of being brave with him. Being brave seldom feels like being courageous. It just feels like there is little choice. Sometimes the ability to be brave involves nothing more than letting the hymn move your heart.

Becky Allender lives on Bainbridge Island with her loving, wild husband of 38 years. A mother and grandmother, she is quite fond of sunshine, yoga, Hawaiian quilting and creating 17th Century reproduction samplers. A community of praying women, loving Jesus, and the art of gratitude fill her life with goodness. She wonders what she got herself into with Red Tent Living! bs
nbso

20 replies to Deciding to Stay.