“Is everything okay?” my voice quivered as I watched the ultrasound tech repeatedly zoom-in and zoom-out, measuring and re-measuring my baby’s developing body. It was taking longer than normal.

“The doctor will examine your results and come in to speak with you,” the tech replied.

Over an hour later, I sat on a metal bed in an office where other mothers of advanced maternal age had sat before me, waiting for the high-risk doctor to deliver words of relief or terror. I tried to breathe.

The door opened. The doctor shook my hand and introduced herself. Then, with a grave expression and a sigh, she said, “We found some issues on your scan.”

She mentioned three issues: a two-vessel umbilical cord, a problem with my placenta, and a heart abnormality, all requiring further diagnosis. Finally, she mentioned that I was at high-risk for my baby being born with a genetic disorder.

Shock. Disorientation. My head felt faint, my skin clammy. I placed my hand on my belly to see if I could feel a twinge of movement from my baby girl.

“I see that you refused the genetic testing we offered you earlier. I would strongly recommend it in case you choose to terminate the pregnancy. There are two conditions that your baby may have which are both incompatible with life,“ she said.

“Termination is not an option for us,” I said. “How would finding out that my baby has a genetic disorder change my treatment?”

“It wouldn’t change your treatment, but  it’s always wise to be well-informed and prepared,” she stated.  “Some women choose to get a photographer in the hours following their birth so they have a way to remember their baby before it passes.”

I was frozen. The language center of my brain was blocked. I felt jittery and my heart rate began racing. I tried to calm down, imagining the stress that I was now imparting to my daughter. Simultaneously, a deep anger rose up in me. She had spoken words of death over my child.

The scene felt like we were in a chess match, strategically deciding on the next move to play while the tender life of my child went unnoticed. I vowed I would never set foot in that office again. That night, I prayed over my daughter, telling her she didn’t need to be perfect in order to be loved and worthy of life.

Months later, our daughter, Charlotte, was in fact born with a severe congenital heart defect and I had a life-threatening placental issue. Both of our lives were saved by the highest level of medical intervention and I’m grateful for the health care we received.

Over the last three years, however, I’ve tried to maintain an openness in my heart about how things transpired that day. I’ve wondered if the doctor was scared of being blamed for my child’s conditions, and I’ve since learned that OB/GYNS are one of the highest sued specialities in the medical system.

I was aware of my desire to blame myself, too. Were Charlotte’s defects somehow the result of my emotional stress, caffeine intake, or pesticides in the non-organic apple that I failed to wash?

It’s part of our human condition to try to find someone to blame for the brutal moments in life that leave us breathless.

Amidst trauma, we blame as a way of grasping for some sense of order or power. A scapegoat is one who bears that blame.

The word scapegoat comes from the book of Leviticus. On the Day of Atonement, the high priest would lay his hands on the head of a goat, confessing over it the transgressions of the community. The Israelites watched as the scapegoat carried their sins into the wilderness to be killed, a foreshadowing of Christ’s sacrifice for us.

Jesus has taken the blame, not only for our contempt and anger, but also for our fear. I wonder if we could stand together, trusting that He bears the terror of a mother blasted by news of her baby’s health, the vulnerability of a doctor who could lose her livelihood just by doing her job, and the precious baby that was positioned between us that day. Sometimes the most innocent lives are the easiest to scapegoat.

The scar down Charlotte’s chest is the the only visible reminder of all that her body has endured. We still have no one to blame. Her story has given me a deep appreciation for the brave children who face life-threatening illnesses and the courageous parents and doctors who face impossible decisions of life or death. I am grateful for the One who took the blame so that we can learn to love in those moments, trusting that perfect love casts out all fear. 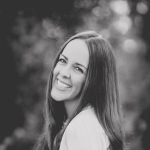 Rachel Blackston loves all things beautiful…rich conversations over a hot cup of lemon ginger tea, watching her three little girls twirl around in tutus, and Florida sunrises on her morning walks.   She resides in Orlando with her lanky, marathon running husband and her precious daughters, priceless gifts after several years of infertility. Rachel and her husband Michael cofounded Redeemer Counseling. As a therapist, Rachel considers it an honor to walk with women in their stories of harm, beauty, and redemption.