Our daughter is back. After eighteen years of being away, of staying away, of hiding the truth of her messy life. We are seeing our “real” daughter again as her walls of fear and shame come down. She’s beginning to shine again.

She was beat down mentally, emotionally, spiritually, and physically. The last physical beating was a year ago. He beat her in front of three of their four children.

He threw her to the ground, elbowed her in the face, pushed her onto the bed, swung at her while she was holding their youngest child, and yanked her out of her vehicle as she’d tried to escape his fists and his fury. The physical bruises have healed.

The oldest had spent the night at a friend’s house – one last outing before school started. She wasn’t there that night and yet she chews her nails down to the skin.The second daughter complains of ailments that feel real to her; headaches, stomachaches, and outer wounds she makes bleed, needing bandages to cover them. The third daughter, only two and a half that night, has loud and relentless temper tantrums often. The youngest, the baby, has temper tantrums, too, and needs his mama close.

The girl with ailments, the oldest of the children home the night of the “incident” as they call it, tried to pull her daddy off her mama that night. He’d tossed her aside and kept on beating. They all heard his loud, alcohol breath hiss out angry, hurtful words at their mama. Like his addiction to alcohol, their mama could never satisfy him for long.

The day of the beating, he’d moved the family to a secluded piece of property in a used travel trailer. “Temporary,” he’d said. It was that night, after coming home drunk, that he took out all of his frustrations and anger on the woman who’d given him everything she’d had for eighteen plus years. He could have killed her. God intervened. Physically exhausted and on the verge of passing out, she’d decided to quit fighting back and told him she needed some air. Once outside, she began walking with the baby in her arms as fast as her adrenaline powered legs could carry her. Her two young daughters followed close behind her down the dark, secluded driveway to the dirt road. He followed her. She doesn’t know why he didn’t try to stop her.

Across the road from their driveway stood an angel talking on her cell phone, a neighbor they’d not yet met. Upon seeing our daughter, angel girl hung up her phone and asked if she okay. She asked her to, “please call 911.” The police came. He went to jail. He was sentenced to three weeks with work release. The divorce is final. She and the children are safe and close to the family he’d tried so hard to keep them from. My daughter and grandchildren are receiving the love and support he’d never allowed them to have from the people who have always loved them the most and the best.

Proudly, her father and I watch as she and the children pick up the shattered fragments of their lives and try to make something beautiful out of the broken, light-reflecting pieces.

Like a slow moving train leaving the station, they are on a journey. A journey toward freedom.

Their journey train is gaining momentum as they do things like go to the beach with family members and friends, learn to swim at their grandparents’ pool with their cousins, the same pool where their mama learned to swim as a little girl, and having money to buy food, clothes, shampoo, gas, and school supplies without having to beg him for it.

Thankfully, she no longer has to gauge when the next storm will blow in, or when his angry fists will leave their mark on her again. The little guy, the baby in her arms that night, has learned to walk and talk this past year. We pray that his legacy will be one of love and respect – especially towards women.

If you need information or a shelter location near you click here. 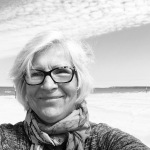 Barbara married her high school sweetheart many years ago where they’d met running the mile in track together on respective teams. Today, she feels happiest riding her bike, swinging on her big old wooden swing on the back patio, sun on her face, sitting hear Lake Michigan listening to the waves, and when she’s playing with her grandchildren. She’s discovered that they bring out the little girl in her who still eagerly wants to come out and play. She, and the little girl inside her, are learning to speak truth. It is a work in progress. She looks to Red Tent Living as a place to hear the clear ring of truth, vulnerability, and strength in the writings and responses from so many beautiful women. It encourages her to keep on keeping on. She is grateful for all who make this forum possible.