I am a refugee, just two generations removed.

At age 15, my grandfather, Alexis Leon Kolshanov left Wirballen, Lithuania, through Estonia, and boarded a ship for New York. His father insisted he leave for his safety. Something was politically amiss in his homeland, and whispers of “relocation” and “extermination” filled the quiet corners of dark bedrooms late at night. America, Great Grandpa Kolshanov said, was the safest place he could think of. But after weeks of stale air and small rations in the belly of a ship, Lady Liberty snubbed Alexis at the gate of freedom. He was turned away at Ellis Island—likely because he was Jewish. Later, he found his way through Canada and was admitted for permanent residence in Vermont, legally or illegally he would never tell. Fear ran high in those days. You never knew who you could trust. Who would understand what fleeing felt like? Who would care that the smell of stale air and small rations still clung to you even now– years after the fleeing?

My grandfather changed his name to Alex Cole, hiding his ethnicity due to the growing anti-Semitism of the day. The reason he fled was real—very real. The siblings he left behind, my grandaunts and uncles, paid a steep price: Alex’s brother, Fodor, barely survived Dachau. His sister, Valentina, died at Auschwitz. And until the day my grandfather breathed his last breath, I could see he was ready to flee again at any moment — because you never know who really sees you.

I have never had to flee anything in my life. Not this kind. The kind of fleeing that is especially hard on women who experience the violence of war. But we can SEE it today–that particularly bitter flavor of fleeing we see exploding in this morning’s paper.

Images of families pushing, carrying, dragging their lives from border to border in hope of entry. Of the 5.5 million Syrian refugees to date, 74% are women and children, each traumatized, with new threats to their safety emerging every day. We see them grappling with exhaustion from palpable fear, that they and their children may die from the lack of a place called home.

“I am abandoned…” Somehow I think that once this thought takes root all hope grows dark.

Though Syria fills our newspapers this morning, there are over 30 million women refugees who face a version of this story all over the world. Over half a million South Sudanese refugees arriving in camps today, exhausted and starving. Congolese refugees experiencing rape as a “weapons of war” beg not to “fall off the world’s radar” during their displacement. And so many more in so many places.

And yet, this is their life.

Places like the Nkamira Transit Camp  set up by the United Nations for Congo’s refugees located just across the Rwandan border. As the camp director and I walked past the tarp walls and tin roofs of 11 warehouse-sized living blocks, I saw women cooking, washing, carrying bundles of charcoal, and waiting in endless lines, ultimately trying to get on with their lives. Every pair of eyes I looked into pled, “Do you see me? I’m here, I’m here!” When I asked them what they feared the most, the question hung in the air for a quiet moment, “We fear being forgotten. There is no hope when you have been forgotten.”

Until now, for Congo, for South Sudan, for Syria the world all but ignored the stunning death, destruction, and violence that plagues the war refugee.

Faithful people opened their eyes and did not turn away. We have seen our own children in the eyes of their children.  We have thanked God for safe arrivals, cheering border crossings. We stand in admiration of such survivors. We are praying and giving. We see their lives.

But I would suggest the game changing move is yet to come.

Will we allow the moment to pass or will we let the game changing move be US? Much is needed in the days to come—food, money, shelter, organization, advocacy, political change. But when those things are allowed to float on the surface of our conscience, to be a sympathetic and socially acceptable response to human suffering, most always the moment passes quickly away.

Make no mistake, we are at our best when we fight for the common good. But there is something tangibly different when we fight from our guts for the dignity and humanity of “the other”.  When we identify with them. When we call them our own. The lesser emotions of pity and sympathy fall away, and make way for what is described in the ancient scriptures as splangchnizomai — supernatural, gut level, no-holds barred empathy. Empathy in the form of understanding care from God to us and then through us to the world.

The beauty of this responsibility is evident when you see it.  It feels real.

My prayer today is that as we move forward in taking our place of responsibility, the questions asked by today’s vulnerable– “who really understands and who really cares?” will be answered with a resounding, and long lasting cry—

We do, with all our lives. 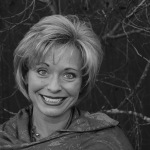 Educator turned advocate, Belinda Wilson Bauman seeks to bring hope to women in crisis. After living internationally for a decade in conflict and post-conflict zones, Belinda experienced what she calls a “beautiful collision” with the brave souls of women who survive in the most dangerous places in the world. She is a wife and mother, speaker and contributor to Newsweek’s The Daily Beast, Huffington Post and Today’s Christian Woman. As the founder of One Million Thumbprints, she leads a movement of peacemakers empowering peacemakers in the world’s worst conflicts. Belinda and her husband, Stephan, and their two sons, Joshua and Caleb, live in Grand Rapids, MI where they relish promoting peace, raising chickens and gazing at stars while living in the country.

2 replies to Life forgotten, or life remembered? You choose