One of my earliest memories is an incident that happened when I was four years old. I had found a dime in the yard and was running to show my mother when my older brother intercepted me. “That’s mine,” he said. I did not believe him, but I knew he would take it from me, so I swallowed it.

Twenty-five years later, soon after I started seeing a therapist, I shared this memory. “And you’ve been doing that ever since,” my therapist said. “What?” I asked obliviously. “Swallowing every threat and hurt,” he replied. That gave me something to think about.

Over the coming weeks and months, my therapist and I talked about all the hurts and rejections that had been too painful for me to deal with and how I had “swallowed” them—stuffing them down deep inside. I came to realize that I had a whole other person living within, a shadow side, made up of all the dark things I had not dealt with.

My therapist helped me to see how I was acting out of these buried feelings, and he encouraged me to look at these past hurts. He actually suggested I “befriend” those things buried deep within. Befriend them? I thought not. I could barely stand to look at them let alone think of them as friends.

But in time, I came to see more clearly how I was acting and reacting out of my past hurts and knew something needed to change.

My therapist help me understand that the things buried in my shadow side could not hurt me again—they were all in the past—and I was no longer a vulnerable child who could not defend herself. I was an adult who could make choices about how I reacted to events in my life. I had options.

Eventually, I became more comfortable staying with past pains when they surfaced, rather than stuffing them back down as soon as I started to feel any discomfort. I got to the point where I could look more objectively at my past, and rather than denying them, I began to incorporate my hurts into my story. I could see how my past had shaped me and helped me be more accepting and compassionate. The wounds were transformed into gifts.

Lots of practice has helped me move more quickly from having my buttons pushed to figuring out what pain is being touched. Just the other day, a friend reminded me of an event from a few years ago. She did not know that the event had been painful for me, and I did not know I was still holding onto that pain. But at her reminder, I felt myself becoming defensive. Awareness is the first step. I pray for the grace to be healed of this hurt, knowing that befriending it will transform it into a gift. 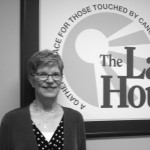 Madeline Bialecki grew up in Detroit and recently returned after living in Philadelphia for twenty-eight years. She began writing about her spiritual journey and faith life after the death of her best friend in 2012. She likes to read, knit, bake and garden. She shares her spiritual journey here.